We are part of the West Northamptonshire Uplands, a landscape characterised by rounded, undulating hills with low ridgelines and wide views from the ridgetops. The area is of outstanding interest for its ancient ridge and furrow fields, examples of which can be found close to the village. Natural England provide an excellent summary of the characteristics of the Northamptonshire Uplands on their website.

The area around Winwick has been designated a Special Landscape Area by Northamptonshire County Council in their County Structure Plan 1996 to 2016. This in turn is recognised by Daventry District Council in their planning development policy EN1.

A Special Landscape Area is designated because of it's: 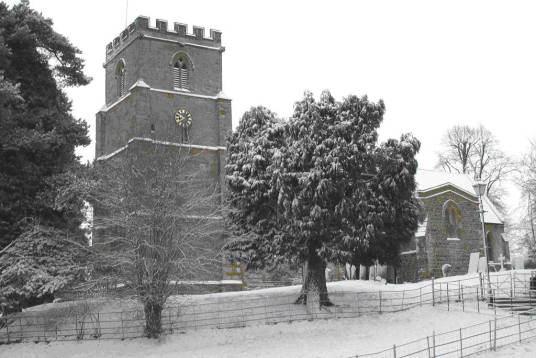 Our 13th century church, St Michael and All Angels is the centre of our community and beautifully situated on a grassy mound overlooking peaceful countryside.

The chancel was taken down in 1853 and a larger one built. This was the work of the rector, Rev A. Bromhead and his wife. They also built a Rectory (now Winwick Hall) and the Old School adjacent to the church gate. In the south trancept is an old barrel organ given to the church by Mrs Bromhead. It is still in usable condition.

The North Transept has an unusual memorial, in both Latin and English which is very rare. This memorial and also the black stone in the centre of The Church are by Edward Stanton, a well known 18th century sculptor. The other memorial in the North Transept is by local sculptor Samuel Huskisson.

The Church registers go back to 1567.  For some years during the 17th Century, there were many more marriages in Winwick than there were bachelors and spinsters in the Parish. It seems that Winwick was something of a Gretna Green for runaway couples in Northamptonshire – probably because they could get married here without the usual requirements of residency beforehand. Handy if the bride was in … a delicate condition. 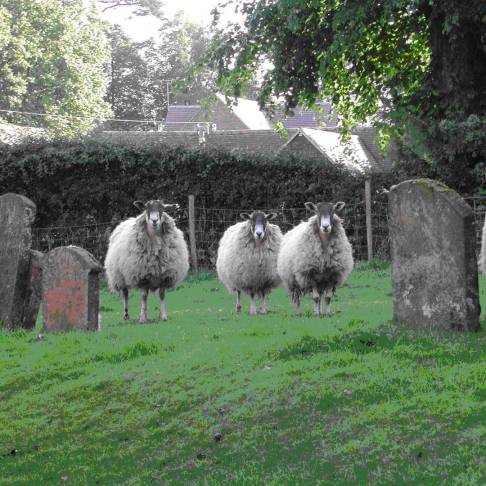 Our churchyard overlooks miles of unspoiled countryside and is particularly lovely in Spring, when the 2,000 daffodils planted for the new millennium are at their best.

The bench outside the church is a perfect spot to see foxes, woodpeckers, badgers and deer. Keep an eye open too for our resident kingfishers, and don’t miss the ducks in the stream. The rural scene is enhanced by sheep grazing in the churchyard.

Our Window on the World 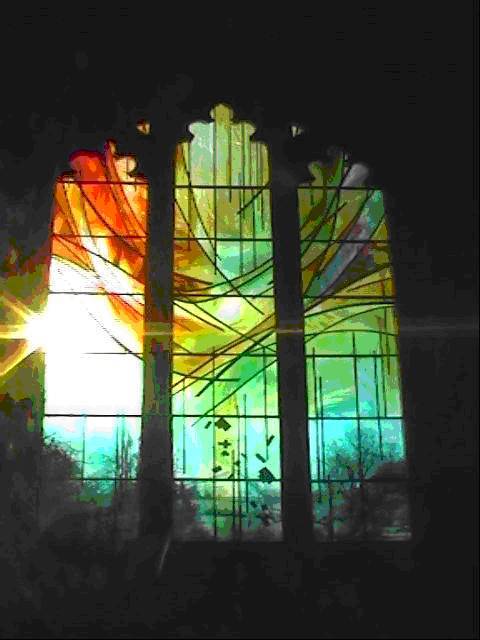 No visit to Winwick would be complete without a glimpse of our new stained glass window in the West wall of the church. Commissioned by the village to mark the new millennium, the window is a gift of love to future generations. The striking design has already been described as being of national importance.

Jane Campbell, AGMP, Designer and Craftsman in Glass, offers visitors this insight into the window.

“An aerial view outlines the village with roads, fields, a stream and the church, which is highlighted. The view leads on to the rural scene of field and trees seen outside the church and throughout the village.

Colours here evoke the tranquility of Winwick and the glory of God, depicted in seasonal shades of autumn through to spring.God’s love comes down from above in golden colours encompassing the village. This shows that God’s love is for everyone. We can all feel included and relate personally to God’s love in our own lives and our own surroundings”. 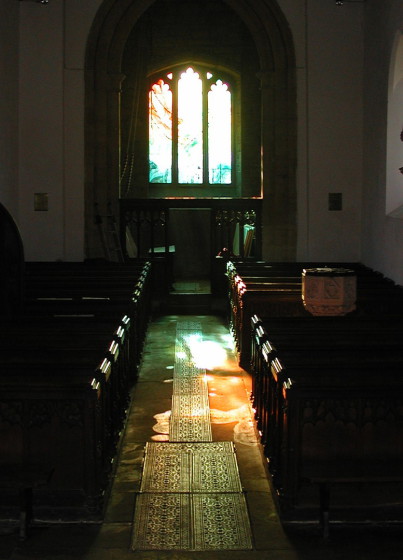 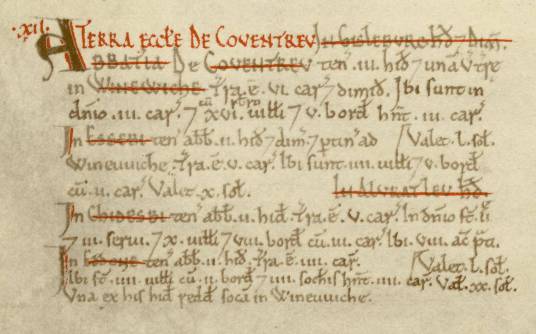 It was King William I, who at a council in Gloucester at Christmas 1085, ordered the great survey of the nation that was to be called the Doomsday Book. He wanted to know how his land was occupied and with what sort of people, how many cattle and what it was all worth.
He sent his men all over England, into every shire and had them find out how many hundred hides there were in the shire or what cattle and land the king had himself, and what dues or taxes he might expect in a year from the shires. Astonishingly, the whole project only took 21 months to complete.

Our village appeared as Winewic in the Guilsborough Hundred. Our value in taxes - just fifty shillings (£2.50). This means we were a bigger tax raiser than our now larger neighbouring village of West Haddon (Eddone), valued at twenty shillings (£1.00). 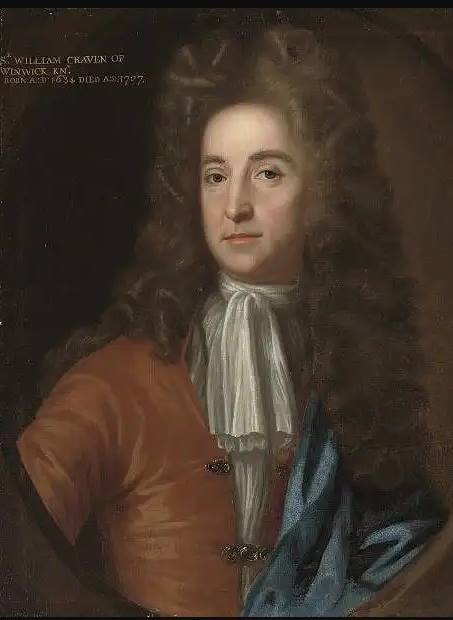 As the sun sank on the Battle of Hastings in 1066, the Saxon villagers of Winwick were leading their oxen home from the fields and attending to the evening milking.

The village of Winwick, or a large part of it, lay further downstream then, beyond The Church. It was dominated by a moated building traditionally known as The Old Manor, and of which only the outlines now remain.

That part of the village was ploughed over in the Middle Ages – not by the villagers themselves, but by the Monks of Pipewell Abbey who had been left 180 acres of land by an early landowner, Ralph de Blukeville.

As members of the Cistercian Order, the Monks demanded seclusion from the world – and so the original villagers of Winwick had to move!

They did so – upstream of the mound on which The Church now stands, and which may have been the centre of their community from the beginning.  Certainly the mound, or moot had always been a place of meeting and worship.

We know for a fact that in 1085 at the time of the Doomsday Survey, there was already a Priest in Winwick. And by the 13th Century we had ‘a stout stone Church and a Watermill’ too.

During the 15th Century, Sir Thomas Malory, famous for Le Morte d’Arthur, a compilation of tales about King Arthur and The Knights of The Round Table, lived in Winwick whilst an MP in Northamptonshire.

A colourful figure, he wrote most of the first book whilst languishing in prison. In 1485 it was published by our first English printer, William Caxton, and forms the basis of all English language Arthurian books, poetry, films and musicals produced ever since.

Malory’s great-great granddaughter inherited the estate, and it was her husband, Sir Thomas Andrewe of Charwelton who built the present Winwick Manor and Tithe Barn in the 1550s.

On the imposing arch at the entrance of The Manor, Sir Thomas left his family crest for all to see – a blackamoor’s head complete with earring.

Sir Thomas’s ancestor Sir Robert Andrewes (1026 – 1076) settled in Winwick after the Norman Conquest and married a local girl. Here is how he is described in The Baronetage of England by E. Kimber and R. Johnson: ‘Sir Robert Andrews, of Normandy, Knt. came into England with William the Conqueror, and married the daughter and heir of Sir Robert Winwick, of Winwick, in the county of Northampton, a parish lying in the hundreds of Guilsburrow (sic), on the skirts of that county, upon the borders of Warwickshire. On this match he settled there, and this place became the feat of his posterity for many ages’. In 2010 we had a visit from Sir Robert’s 27th Great Grandson. Richard Andrews was over from near Seattle in the USA to discover his roots. We have kept in touch with Richard ever since. In fact he recently contributed to the Winwick Warbler magazine.

For the greater part of the 17th Century the swashbuckling Lord William – later Earl – Craven owned the land. He leased it to his cousin and his new wife, William and Mary Craven – and it is they who lie under the black marble slabs in the nave of the Church. The portrait above was described as ‘Portrait of Sir William Craven, of Winwick, Northamptonshire (1634-1707), bust-length, in a brown coat and blue mantle, in a feigned oval’ when it was sold at auction by Christie’s in 2007.

Throughout this time the parish remained agricultural. The Miller was the only man involved in anything approaching industry.

Agriculture is still the main occupation within the parish, just as it was 1,000 years ago. There are roughly the same number of households here today as there were in 1085, but these days residents pursue careers outside the village, rather than toiling in the fields or working at The Manor. The Mill no longer grinds the parish corn, and a taxi takes the children to school elsewhere. 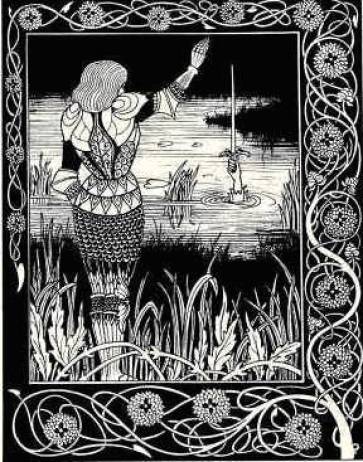 On a literary theme, one of the many reasons people visit our village is our association with Sir Thomas Malory, who was Lord of The Manor in Winwick.

It was Malory who wrote “Le Morte d’Arthur”, which was printed by William in 1470.

Malory’s book is the forerunner of Tennyson’s “Idylls of The King”, and indeed of every tale ever told of the Knights of The Round Table. 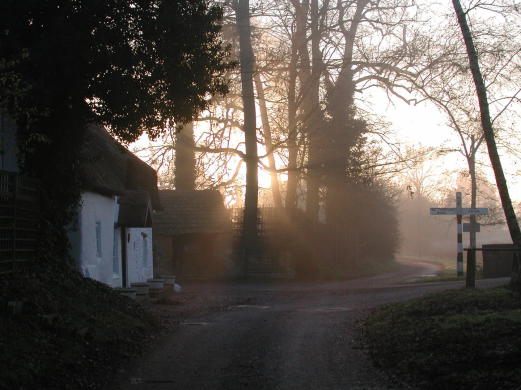 Many people visit Winwick as they walk the Jurassic Way, a long-distance recreational footpath that meanders across Northamptonshire and through the village.

The 88 miles of the Jurassic Way are renowned for beautiful countryside, fossils and rocks from 140 – 195 million years old.

Wikipedia article about the Jurassic Way.

The Battle of Naseby 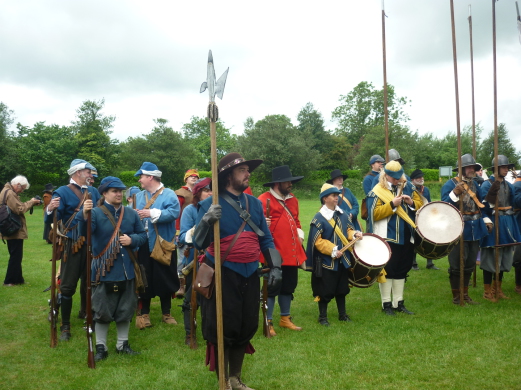 On June 14th 1645, with the English Civil War in full swing, a decisive battle took place in the rolling fields of Northamptonshire.

Within three hours, the Civil War was decided, a King and a kingdom were lost, and the foundations for a republic were laid.

Naseby is just six miles from here – indeed it is claimed that men from Cromwell’s cavalry slept in the Tithe Barn in Winwick on the eve of the battle.

The battle site is well worth a visit. 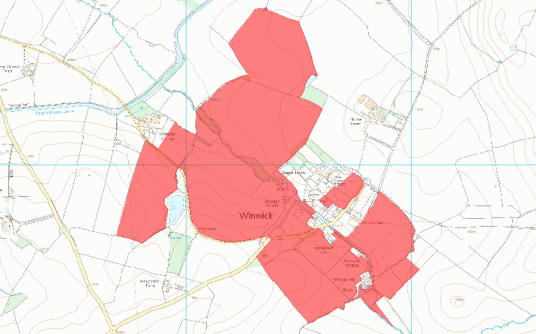 Thanks to the research and report by English Heritage, the Secretary of State for Culture & Media has decided to add the medieval settlement at Winwick to the National Schedule of Monuments.

The medieval village site at Winwick which is first mentioned in Domesday, was recommended for designation for the following principal reasons: 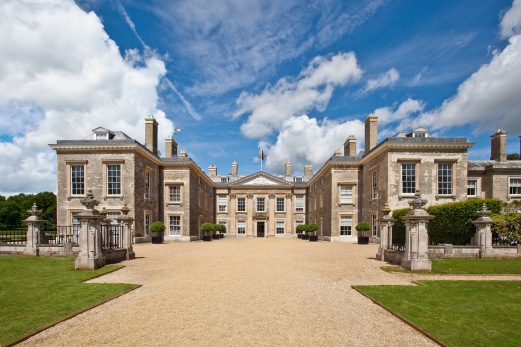 Just fifteen minutes drive from Winwick is Althorp House. Home to the Spencer family for nearly 500 years, Althorp became the focus of world attention following the tragic death of Diana, Princess of Wales in September 1997.

Much of Althorp’s charm derives from the sheer beauty of its setting. The House is set in 450 acres of parkland, largely unaltered since the 16th century.

Inside, the House contains a fascinating variety of furniture and ceramics as well as one of the finest collections of portraiture in the world.

And don’t miss the stable block. Constructed from Northamptonshire ironstone to house 100 horses and 40 grooms, its Palladian grandeur is in stark contrast to the grey mansion house. Althorp House 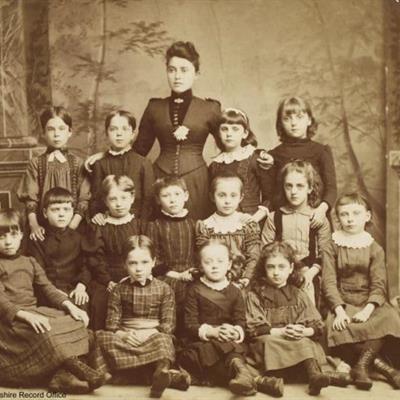 We receive a lot of family history enquiries from people who visit this website or visit the village. For example, here's the 'Winwick' page from a family that connects to the Gurneys: Orland Family.

Stephen Harper-Scott from Cambridge publishes a regular Gurney Family History Newsletter. Stephen has a Facebook page dedicated to the history of Winwick called We Love Winwick.

The Northamptonshire Family History Society produce a booklet containing Memorial Inscriptions from the Church of St Michael & All Angels Winwick. A copy can be obtained for £1.75 plus 40p P&P by emailing committee member Mary Ginns.

SatNav. This is the postcode for the whole village. NN6 7PD

Medical Emergency. There is an AED in the War Memorial. What3Words Link

Get social with us.